When I found out I was pregnant last year I was of course thrilled for a new little bundle to join our family. Soon after it sunk in,  I got super excited to do another nursery! We didn’t find out the gender with either of our boys and they were so close in age that I just used the same nursery for both of them. It was gender neutral and of the “pre-pinterest era” so I have had years to collect ideas and get inspired :) I already knew what I wanted long before I even knew the gender so when I found out this girl was a girl… I knew a dot wall was happening.

I know I’m a little late to the gold-vinyl-dot-wall-party but I still love it, so I thought it would be perfect for the wall behind the crib. I have seen the gold dots randomly placed on walls and while I do love random I wanted a pattern this time. I searched and searched for a tutorial on how to get THIS LOOK  in my inspiration photo but I wasn’t able to find much. I called for backup, my mom and sister. I’m sure there are many ways to achieve this look but this is what we did.

I bought gold sticky vinyl online and used my cameo to cut 1.5″ dots. I have the silhouette file saved, if anyone wants it let me know.

Other than my dots, I used these supplies: a ruler, tape measure, piece of cardstock, scissors, some very sticky double sided foam tape and a pencil. The other must have tool is a laser level. I found this one at Home Depot for around $8.

After measuring my wall, my mom (the math star of the team) figured out how far apart my dots could be based on how many dots we had. I bought 8 feet of vinyl (8’x12″) and the dots were 1.5″ in diameter so she figured each dot needed to be 6.5″ apart. The very first two rows are the hardest because you have to get everything set from those, so we started at the top of the wall. Thank goodness for my mom and sister! My sister climbed the ladder for all of the tall dots, I didn’t take over until we were about halfway done. (grainy iphone pic)

The whole trick to getting the pattern to look like a pattern is getting straight lines on your wall, enter the laser level. I’m sure you could also use other methods like an overhead projector, use a regular level with a tape measure and pencil, pop a chalk line, etc. But I really liked this little tool. We used the double sided foam tape on the back which needed to be changed every few rows. Once you get it taped it up it rotates 360 degrees so you can get it lined up correctly after mounting it to the wall.

This is a very hard picture to see but the laser line on the left is below the pencil marks so you have to play with the laser until the the line is perfectly on the marks like the picture on the right.

As far as the spacing on each row we also spaced the dots 6.5″ apart. Instead of holding a ruler or tape measure between every dot we measured a piece of cardstock and used that as the ruler. We measured 6.5″ from outer edge of each dot and made sure the top of the dots lined up with the red laser line.

After you get your first two rows up, its pretty easy. A few other tips… every other dot on our left side had to be cut in half. And I did have one dot that I had to put under the power outlet plate.

I really love how it turned out and I can’t thank my mom and sister enough! We worked one night from about 2-3 hours then I finished it up the next afternoon so it was a pretty quick project. The most time consuming part is getting the level lined up but I love the patterned look so it was worth it!

Here is a little peek at the crib. I will have the details on the bedding and quilt next week.

So does anyone else have a dot wall at their house? Let me know if I left any info out… I am suffering from pregnancy brain lately :)

I made another chalkboard, I just cant get enough. You can check out my 1st one HERE. This time I used a frame from Goodwill that my mom had lying around.

My husband cut a piece of plywood to fit right in the lip of the frame.

Then I painted the chalkboard paint right on. I used the liquid quart paint and roller method this time as opposed to the spray paint. I actually liked this way better. It only took 2 coats and went on way smoother and easier.

Then, last week I saw Jess from Craftiness is Not Optional post this on Instagram. It’s a really cool and easy chalkboard lettering technique that she got from Hello Beautiful Blog. Its my new go to way to write on chalkboards! Once the paint dried, I used this technique for writing a little heading on my chalkboard.

I used wood glue to hold the plywood into the frame and let it dry over night. Don’t forget to season it by rubbing chalk on its side all over and erasing. Voila… a new chalkboard using only scraps!

Here it is in its new home. And a little sneak peek of my craft room :) My husband and I have been working hard to make this place the “worlds best craft room”. And it is. 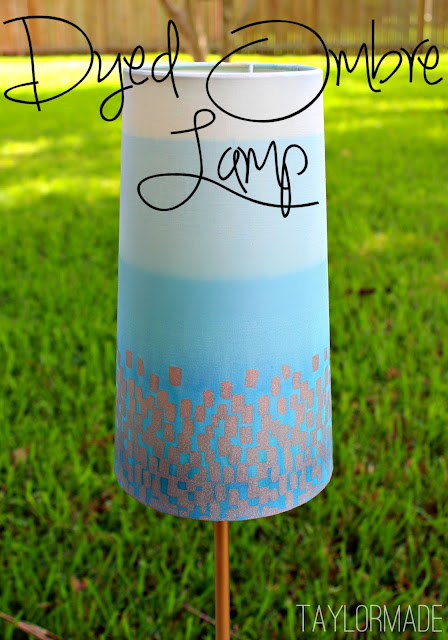 Last month I received one of my favorite things in the mail… a Tie Dye Kit from Tulip. Seriously, I have Tie Dye problem… sometimes my husband calls me Rupert (survivor fans?). I’m not kidding, I am drawn to it like an old hippie and I am know to sport multiple Tie Dyed shirts around my house in one week. Anyway, I was obviously excited to see this when I opened my Tulip Box… 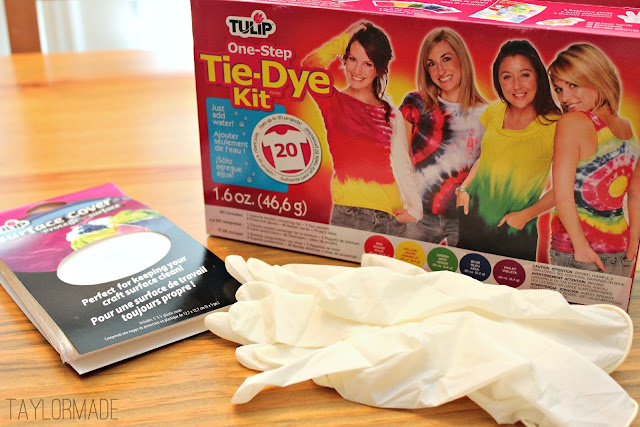 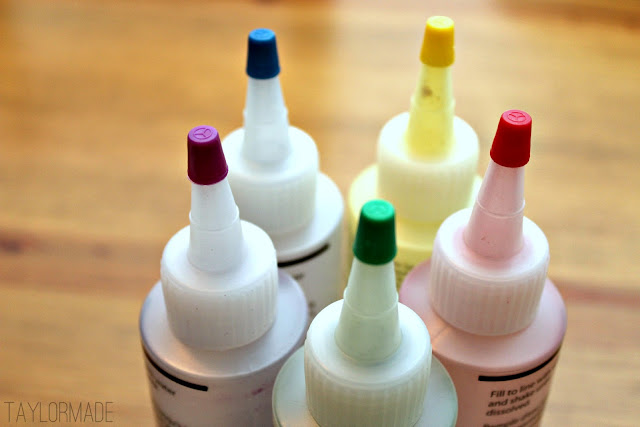 With my surplus of shirts, I wanted to make something for my house. So I did a really quick and easy Lamp Makeover for my bedroom. I have had this lamp for a year or so; the shade and the base are from Ikea and my nightstand needed some color. Enter the before and after: 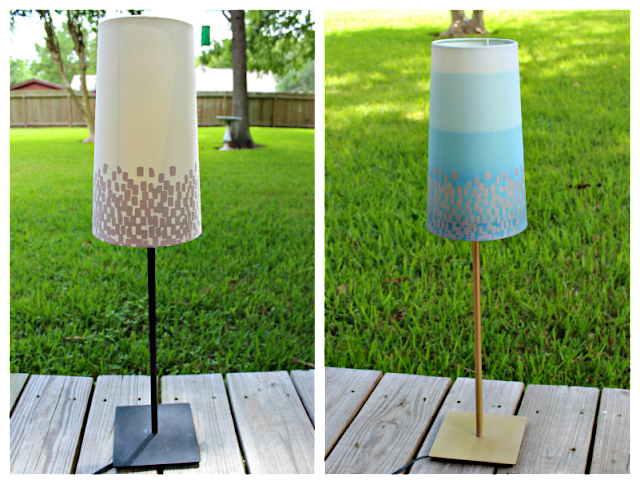 I started with a 5 gallon bucket (which is a must need for crafters) and filled it with a tiny amount of water. I wanted a turquoise color so I mixed the Blue and the Green Dye together in my bucket.

Then I placed my lampshade into the dye bucket, moving it up and down in the dye a few times to get it good and saturated. 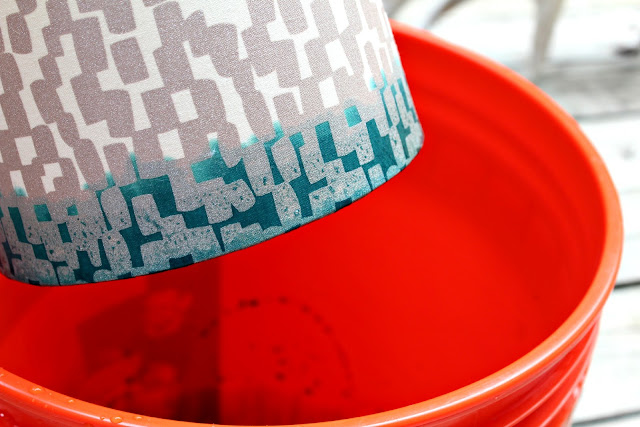 I left it there for about 30 minutes, then added a little water. 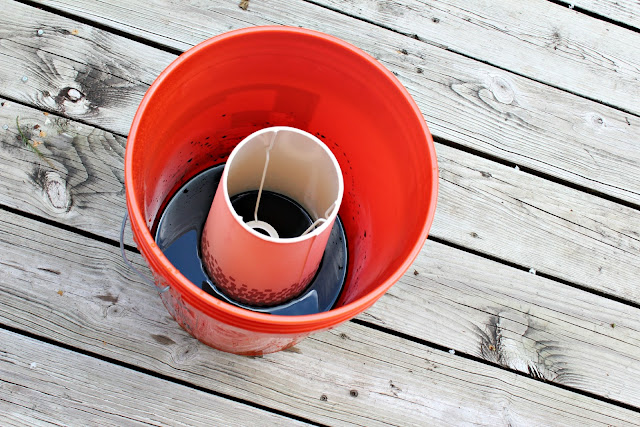 I continued doing this same thing throughout the day. Diluting the water with each step is what created the ombre effect.  I set my alarm each time for 30 minutes but looking back I think I would have done each step even longer for a brighter color. 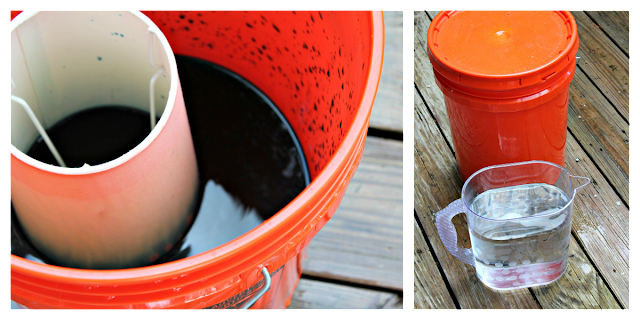 I also taped off the base cord and top of the lamp and gave it a few coats of gold stray paint. 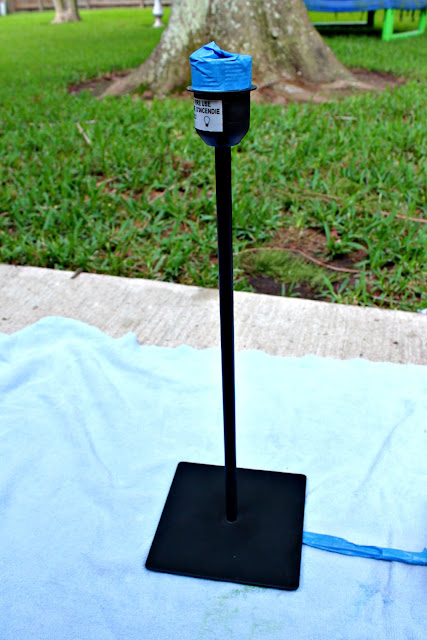 I really love it in it’s new home, a much needed pop of color. 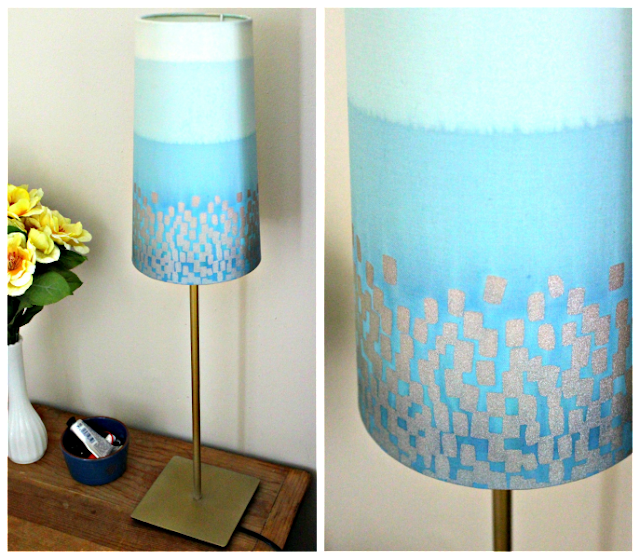 *I wrote this post as part of a paid campaign with iLoveToCreate.com and Blueprint Social. The opinions in this post are 100% my own*
Last week our store, Ampersand, had its big Grand Opening! We have been open about two months now and we are loving every minute of it. I was crafting like crazy getting ready for the big day. We needed a chalkboard and my mom and I looked everywhere but we could only find one at a teacher supply store. Turns out they are $40 +. Emphasis on the +. So I decided to DIY one… because I just don’t have enough to do :) But I figured I could beat $40. 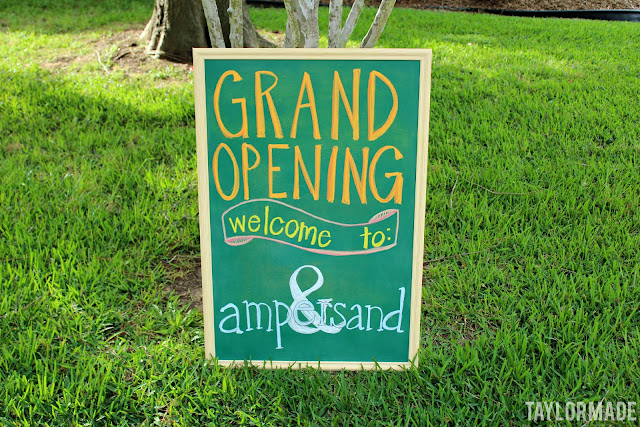 I’m not reinventing the wheel or anything, its so simple anyone could do it! For the base of the chalkboard I used an MDF board from Home Depot, it was about $3.00. They come 2’x4′ but we cut ours down to 2’x3′. 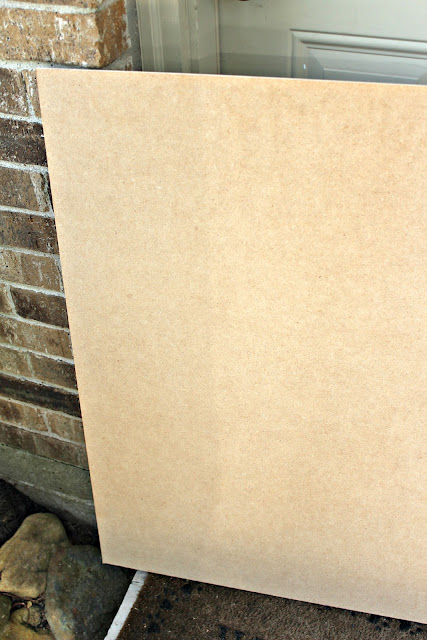 I used chalkboard spray paint (no Krylon affiliation) in green, which was about $6.00. 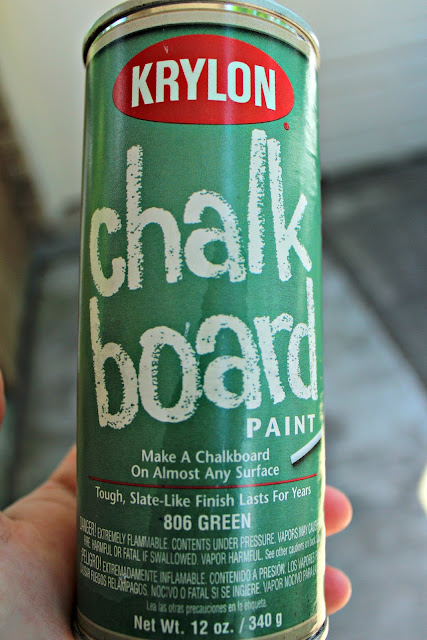 My best tip is to do several very thin coats. I put my board on some bricks and just left it outside all afternoon. I applied a new coat every 45 minutes or so for a few hours. 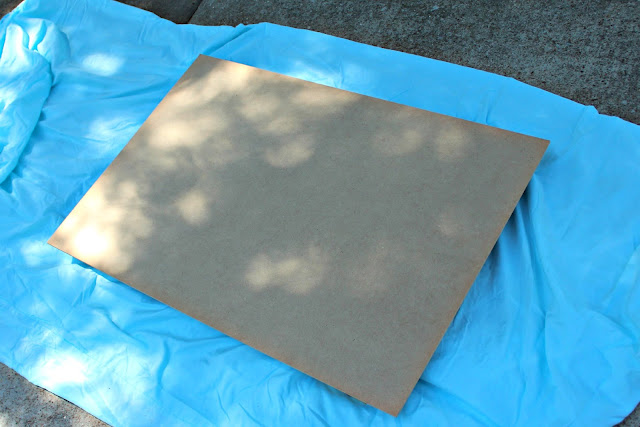 Here it is after 2 coats, still very spotty. I did about 6 or 7 coats total. 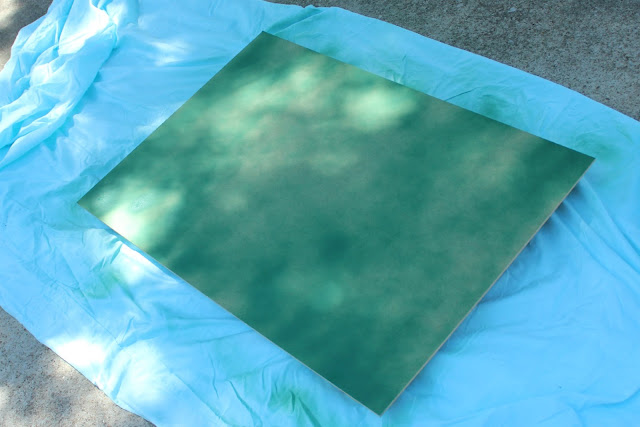 The next step is important – you have to prime the board with white chalk. Just use the long side and rub chalk all over the board. 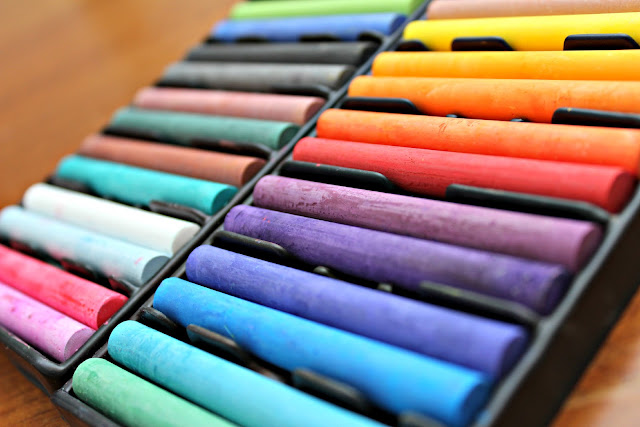 After you wipe it off with a wet towel and let it dry, you are ready to use your chalkboard. 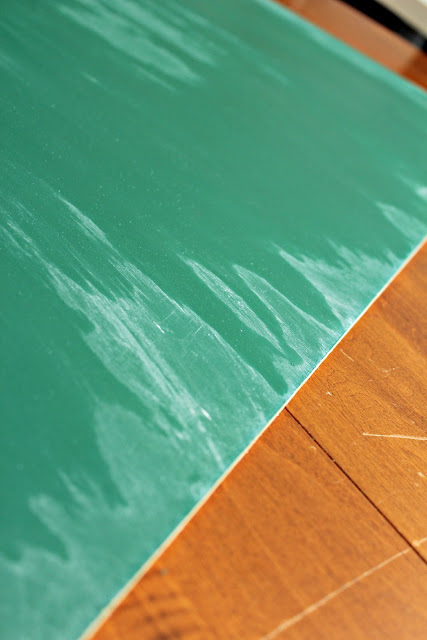 My husband made a quick frame for me out of molding. 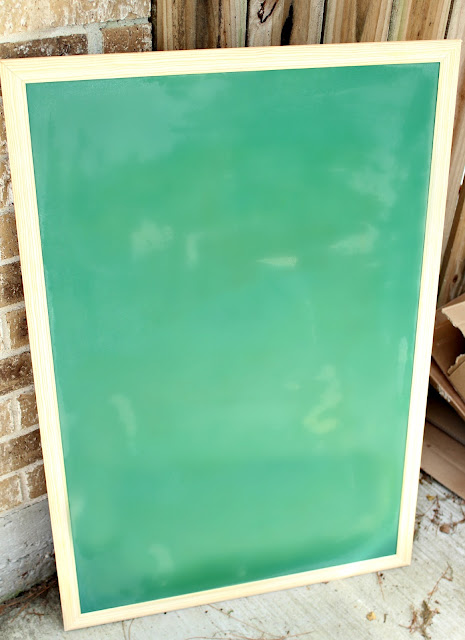 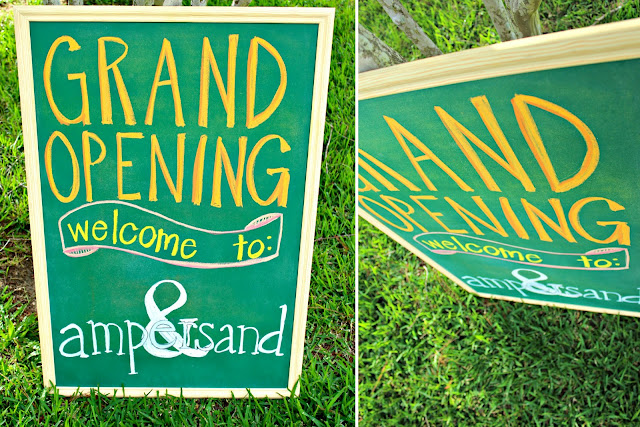